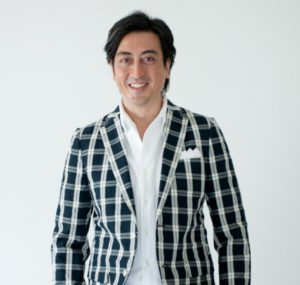 Producer and TV/Radio host. A world citizen based in Japan.

Having spent his school days in both an international school in Tokyo and in Rome, Andy acquired the fluent command in English, Japanese, and Italian. It was quite natural for him to start searching for his identity at the early stage of his life then.

With a great interest in the reality of the world, Andy travelled across the globe as a young photo journalist, also experienced various careers such as event productions and public relations for diverse clients in and outside of Japan. In 2005 Andy became a radio deejay / presenter at J-WAVE, a highly acquainted FM station in Tokyo, and ran 3-hour Saturday live show MODAISTA, and THREE SIXTY for 7 and half years overall, notably connecting with more than 30 radio stations in elsewhere in the world and visiting 11cities for live feed from abroad.

Andy has been the host for NHK WORLD “DESIGN TALKS PLUS” since 2015, presenting the beauty of Japanese designs to the world. The DESIGN TALKS PLUS (English version) is shown on TV in more than 100 countries in the world and online as well. Selected archives are also shown as Japanese overdubbed version on NHK EDUCATIONAL.

Andy describes himself as a ‘filter’, hoping to help connecting Japan to the rest of the world.

TV
NHK EDUCATIONAL DESIGN TALKS Plus
Andrea Pompilio presents a program that reveals the depth and beauty of designs created in Japan.
(JAPANESE VERSION, selective episodes from the archives)

TV
NHK WORLD DESIGN TALKS Plus
Andrea Pompilio presents a program that reveals the depth and beauty of designs created in Japan.

* New episodes are broadcasted worldwide except North Korea, in English language only.

* For viewing new episodes in Japan, see the NHK WORLD website for online streaming services. The latest episode is available on demand streaming after the broadcast.